View cart “FOR ONE MONTH ONLY TOGETHER BOX SET EXCLUSIVE PRICE JUST £25” has been added to your cart.

FOR ONE MONTH ONLY TOGETHER BOX SET EXCLUSIVE PRICE JUST £25

The lives of the residents of Rutherford Court

Running Time approx: 1244 minutes. 51 Episodes on 6 DVDs.
All episodes are unedited and complete.

Originally broadcast from 1980-1981, Together was a daytime soap opera made by Southern Television. Rutherford Court was a modern block of sheltered accommodation flats run by a housing association – where each home had its own share of dramas, tensions, happiness and heartbreak. The warden in charge was played by Sheila Fay, her husband was the odd-job man about the place, played by John Burgess, and their teenage daughter, who had countless problems with her love life, was played by future Blue Peter presenter Sarah Greene. Other residents included a newly-wed couple who were having marital difficulties, with realistic scenes because the actors, Richard Everett and Gillian Bailey (who played Billie in Here Come the Double Deckers!), were married in real-life. Victor Maddern played ex-London cab driver with a roving eye. The original episodes Series 1 Episode 22 and Series 2 Episode 10 are lost and have not been included.

The second series was broadcast live with a theme song performed by Dame Cleo Laine DBE, written by her husband Sir John Dankworth CBE, better known as musician Johnny Dankworth. Music used in the series was written by Denis King.

Made with the intention of targeting a daytime audience, the series soon had dedicated viewers. Ground-breaking at the time, the scripts tackled current issues such as marital problems, divorce, mental illness and relationships, paving the way for future TV dramas and soaps. Sadly, the series ended when Southern Television lost their franchise. The series has never previously been released on DVD. It is presented here with the 51 available episodes intact in a 6 disc box set. 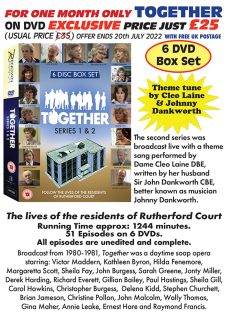 You're viewing: FOR ONE MONTH ONLY TOGETHER BOX SET EXCLUSIVE PRICE JUST £25 £25.00
Add to cart