Frank Chacksfield conducted one of the finest light orchestras in the world, and during his long recording career with Decca alone it is estimated that his albums sold more than 20 million copies. This classic album of TV Themes was originally released on the renowned Decca Phase 4 Stereo imprint in 1966. It features the most popular TV themes of the era, composed by some of the world’s finest soundtrack composers. With music composed by Nelson Riddle (Route 66), Henry Mancini (Peter Gunn) Lalo Schifrin (The Man From U.N.C.L.E.) and many more. The CD is mastered from Decca’s original tapes. The Phase 4 Stereo series was created in 1961 to enable Hi Fidelity sound recordings to be made available to everyday record buyers. The albums were recorded on a 10-channel, and later a 20- channel, recording console to give the finest sound and stereo separation. By the time this album was made the series was at the peak of it’s success. This CD is a HiFi spectacular that brings back memories of some of the finest TV Shows of the 1960s. 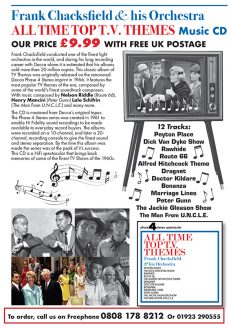