Fred Dibnah’s life changed forever the day he popped up on local television news in 1978, blithely repairing Bolton’s town hall clock at the dizzying height of 250 feet.  With his specs, cloth cap and infectious grin, he quickly found a place in the nation’s heart and became a familiar sight on our screens, demolishing giant factory chimneys with ease and casually hopping across the chimney tops with death-defying agility. Now for the first time together on DVD, the 7-episode 1982 BBC television series Fred is combined with the BAFTA winning 1979 documentary Fred Dibnah: Steeplejack.

With the world literally at his feet, Fred was much in demand as a TV pundit and after-dinner speaker on industrial history and all things mechanical – and especially anything related to his overriding passion: steamrollers. Awarded an MBE for services to heritage and broadcasting, he was already battling kidney cancer when he arrived at Buckingham Palace to collect it – in his green, black and gold eight-ton steam traction engine! Rejecting chemotherapy in favour of Guinness and oranges, the nation’s favourite steeplejack left us for good in November 2004.

OUR PRICE £20 WITH FREE UK POSTAGE 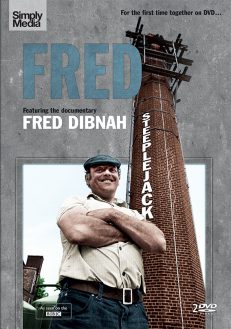