BOOK AND CD TOGETHER JUST £25!

The first 100 orders will also receive a photo
personally signed by Freddie!

Funny Bones: My Life in Comedy

An Autobiography with Anthony Teague

In 1964, an appearance on TV talent show Opportunity Knocks made comedian Freddie Davies famous overnight. The joke he told involved an exasperated
character remonstrating with a tiresome pet-shop owner with the words: “look here, Parrot-face!” Beginning as a Butlin’s redcoat, working with Dave Allen and Jimmy Tarbuck, Freddie became one of Britain’s best-loved comics, appearing in over 500 TV and Radio shows. By the 1980s, he had become a serious actor, appearing in Casualty, Heartbeat, Last of the Summer Wine and in a RSC production of The Secret Garden, as well as the cult film Funny Bones,
based on Freddie’s music hall comic grandfather Jack Herbert, with Lee Evans, Jerry Lewis, Leslie Caron and Oliver Reed. He now performs as his TV character Samuel Tweet. In this book, Freddie tells of his early days in Salford; a gruelling apprenticeship in the Northern clubs and the family secret that rocked his world. This unique autobiography is a poignant yet hilarious evocation of a vanished era.

“An invaluable record from a comedy superstar…” Ken Dodd, OBE

To Wish you a  Merry Christmas CD

A compilation of festive tunes performed
by the one and only Freddie Davies!

Where did the Snowman go?

All I Want for Christmas is my two front teeth

The Twelve Days of Christmas

Back Home for Christmas

Santa Face is bringing me a Budgie 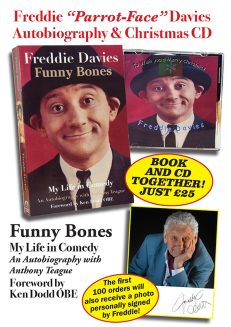