From the BFI: The COI Collection Volume 8 Your Children and You

The COI Collection Volume 8:
Your Children and You

The Central Office of Information (COI) was established in April 1946 as a successor to the wartime Ministry of Information. It went on to produce and distribute thousands of films for use across Britain, the Commonwealth and the world. Many famous faces have passed through the portals of the COI including luminaries of the British documentary movement such as Paul Rotha, Humphrey Jennings and Lindsay Anderson and in later years the likes of Hugh Hudson (Chariots of Fire) and Peter Greenaway (The Draughtsman’s Contract) who spent 15 years there.

The BFI continues its celebrated series of releases from the COI archive with this double-disc collection of films made by the UK government about childhood and children.

From post-war films made to promote healthy eating, good schooling and getting your baby to sleep, through to a 1980s documentary on artificial insemination, Your Children and You is a fascinating look at the social history of Britain and our ever-evolving attitudes to children and child-rearing.

This collection also includes rare films from the Wellcome Trust archive on the themes of childbirth and motherhood. Three of the films feature newly recorded scores.

Extras: Bathing and Dressing, Parts 1 & 2 (1935, 20 mins): a meticulous demonstration of how to bathe and change a very young baby. Toxemia in Pregnancy (1958, 12 mins): an informative film about this serious condition. Maternity: a film of Queen Charlotteís hospital. (1935, 14 mins): a film showing antenatal and postnatal care in the 1930s. Childbirth as an Athletic Feat (1939, 8 mins): a series of antenatal exercises suitable for a mother-to-be. 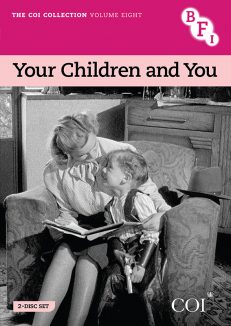 You're viewing: From the BFI: The COI Collection Volume 8 Your Children and You £15.00
Read more