From the BFI: THE PAWNBROKER with Optional Subtitles

You will receive both DVD and Blu-Ray discs

Sol Nazerman, a Jewish pawnbroker, is a survivor of the Nazi death camps which took the lives of his wife and children. A man without faith in his fellow man, he takes refuge in misery and a bitter condemnation of humanity, while managing a Harlem pawnshop where heís subjected to an endless parade of prostitutes, pimps and thieves. Seemingly only caring about money, he is continually haunted by vivid flashbacks to the concentration camp. Oscar-nominated for his performance, Steiger firmly established his credentials as an actor of international standing, wonderfully supported here by Geraldine Fitzgerald (Wuthering Heights) and Brock Peters (To Kill a Mockingbird). The film features a score from the composer Quincy Jones.

Extras: Newly recorded audio commentary by Maura Spiegel, author of Sidney Lumet: A Life and Annette Insdorf, author of Indelible Shadows: Film and Holocaust.
Guardian Interview: Rod Steiger (1992, 113mins, audio only): Rod Steiger discusses his career and talks about his mental health issues in this interview recorded at the BFI’s National Film Theatre by film critic Tom Hutchinson.
Now and Then: Quincy Jones (1968, 20 mins): the legendary producer, musician, songwriter and composer Quincy Jones is interviewed by Bernard Braden.
Ten Bob in Winter (1963, 12 mins): Lloyd Reckord’s early Black British Cinema classic about the intriguing social dynamics that arise as a ten shilling note is passed around the Black community.
Trailer; The Pawnbroker gallery.
First Pressing Only: Illustrated booklet with new writing on the film by filmmaker and film historian Jim Hemphill, an essay on Quincy Jones by Nicolas Pillai and a Sidney Lumet biography by Maura Spiegel. 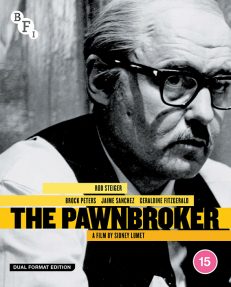 You're viewing: From the BFI: THE PAWNBROKER with Optional Subtitles £15.00
Add to cart