View cart “Sparrows Can’t Sing” has been added to your cart.

Never commercially released before and previously only shown to a highly restricted audience of top military brass from the Ministry of Defence, Captured (1959) is a stunning POW drama and a lost gem of British post-war film making.

Directed by cult British director John Krish, the film was sponsored by the Army Kinematograph Corporation. This tightly plotted drama shows British POWs enduring brainwashing and torture during the Korean War, thereby revealing what a soldier could expect if he was ever captured by enemy forces.

Captured is accompanied by other rarities from John Krish, including H.M.P. (a 1978 fly-on-the-wall documentary about the Prison service) and Krish’s celebrated 1977 public safety short Finishing Line. All of these films have been transferred to HD by the BFI from the very best available film materials. 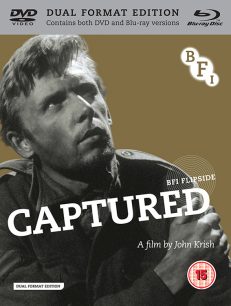 You're viewing: From the British Film Institute: CAPTURED £15.00
Read more