This television adaptation of George Orwell’s novel was first broadcast in 1954. Featuring totalitarianism, mass surveillance and repression of people, it is based on Stalinist Russia and Nazi Germany. Winston Smith, a worker at the Ministry of Truth, secretly hates the ruling Party and dreams of rebellion. He writes his thoughts in a hidden diary and begins a forbidden relationship with his colleague Julia. The novel was adapted for television by Nigel Kneale, a prolific scriptwriter, who created The Quatermass Experiment. Peter Cushing played Winston Smith, in one of his first major roles. He became a film star, as did co-star Donald Pleasence. Yvonne Mitchell, (Turn the Key Softly) and Wilfrid Brambell, (Steptoe and Son) also starred. The music was played live by a full orchestra, following the action on a screen. 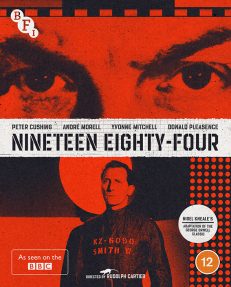