From the British Film Institute: That Sinking Feeling on DVD

A film by Bill Forsyth

Unemployed teenager Ronnie, (played by Robert Buchanan), and his hapless pals spend their time hanging around the rainy parks and dingy cafés of Glasgow, but their world is about to change when Ronnie hatches a plan to make them all rich by stealing a job-lot of stainless steel sinks. Hilarious and inventive, Forsyth’s zero budget debut provides an authentic depiction of 1970s Glasgow youth culture, and is presented here for the first time in a new HD transfer complete with the original Glaswegian dialogue track.

Kermode Uncut (2012, 9 min): an analysis of the budget for That Sinking Feeling. 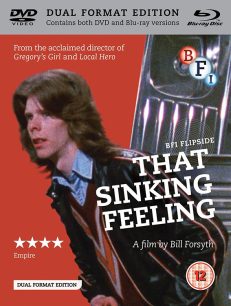 You're viewing: From the British Film Institute: That Sinking Feeling on DVD £15.00
Read more