From the British Film Institute: THE BATTLE OF THE SEXES

THE BATTLE OF THE SEXES

(Dual Format Edition, you will receive both DVD and Blu-Ray editions)

When Angela Barrows, an accomplished business woman from the US, is sent by her company to Edinburgh to look into potential export markets, she meets Robert MacPherson, a company manager who has just inherited his fatherís textile business and wants her advice on updating it to modern standards. Angela introduces new ideas and the employees, scandalised that they have to work under a female boss, turn to head clerk Mr Martin, who promises to lead the fight against the interloper.

Hancock’s Hard Boiled Eggs Sellers’ contemporary, the lad from East Cheam himself, Tony Hancock, appears with “The Battle of the Sexes” Patricia Hayes in this cracking collection of 11 egg-cellent Egg Marketing Board adverts from 1966.

Images of Edinburgh in Archive Film a selection of rarely-seen short films capturing Scotland’s capital in the first half of the twentieth century, from the BFI National Archive. 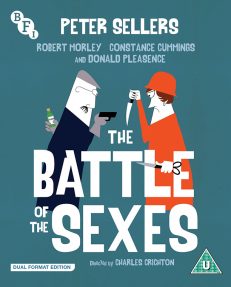 You're viewing: From the British Film Institute: THE BATTLE OF THE SEXES £15.00
Read more