From the British Film Institute: THE GREAT WHITE SILENCE

From the British Film Institute:
THE GREAT WHITE SILENCE

The official record of Captain Scott’s heroic journey to
the South Pole.

You will receive both DVD and Blu-Ray discs.

Herbert Ponting’s official record of Captain Scott’s legendary expedition to the South Pole, restored by the BFI and featuring a new musical score by Simon Fisher Turner, captures in breathtaking detail the alien beauty of the landscape, and ensured that the heroism involved would never be forgotten.

The BFI National Archive – custodian of the expedition negatives – created this award-winning restoration using the latest photochemical and digital techniques at the time, reintroducing its sophisticated use of tinted colour.

Great White Silence: How Did They Do It? (2011,20 mins): new documentary about the restoration.

The Sound of Silence (2011, 13 mins): new documentary about Simon Fisher Turner’s approach to the score. 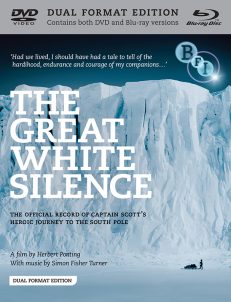 You're viewing: From the British Film Institute: THE GREAT WHITE SILENCE £15.00
Read more