View cart “CLASSIC STEAM ENGINES 5-DVD Set” has been added to your cart.

A collection of silent films from 1924, painstakingly restored by the BFI National Archive to reinstate their original tinting and toning, with new piano accompaniments by world-renowned silent film pianist John Sweeney. The six films in this collection offer a fascinating glimpse of London life during the mid-1920s. Directors Harry B Parkinson and Frank Miller created travelogues for cinema screenings. This collection features 12 short films, six of which have been digitally restored by experts from the BFI National Archive and six more black and white prints made by the BFI using traditional film printing methods.

Wonderful London captured some of the most evocative images of the capital in the 1920s. These films contrasted different aspects of city life: the East End and the West End, poor and rich, natives and immigrants;  often looking beyond the stereotypes to show surprising views of the city.

As well as familiar landmarks of London town,  the Thames, Big Ben, Tower Bridge and St Paul’s, Wonderful London reveals the lesser known areas; the over-populated districts of Clerkenwell, London’s original Chinatown or the South Asian and African seaman who worked in the Port of London.

Wander past the long gone Crystal Palace and the recently vanished gates of the White City and Londonís first Olympic stadium, now lying under the new Westfield hopping Centre. Take a trip on a barge from Limehouse to Paddington Basin, via Kingís Cross and the Zoo, peering into urban back gardens. Visit the Sunday street markets and ander down narrow alleys, past pot-bellied pubs, the inns of court and the buildings that Dickens knew.

Wander through a capital where donkey carts co-exist with electric trams and stylish flappers shimmy past flower girls straight out of Shaw’s Pygmalion. Wonderful London reveals a city as familiar as it is different: full of life, and fascinating.

This collection includes six restorations by the BFI National Archive:  Barging Through London, Cosmopolitan London, Londonís Sunday, Flowers of London, London’s Free Shows and London off the Track;  all of which reintroduce the films’ original tinting and toning. 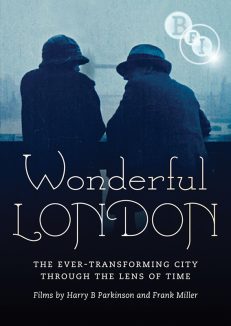