Director Thorold Dickinson, (The Queen of Spades, The Next of Kin), portrays a harrowing and claustrophobic study of murder, abuse and lust in Victorian London. Anton Walbrook (The Life and Death of Colonel Blimp), excels as the sadistic husband who attempts to drive his wife mad, played by Diana Wynyard, (Cavalcade), to prevent her from disclosing his dark past.

Spanish A B C (Thorold Dickinson, Sidney Cole, 1938, 20 mins): a short film on efforts to improve education standards during the Spanish Civil War.

Miss Grant Goes to the Door (Brian Desmond Hurst, 1940, 7 mins): a short film about a German invasion from a story by Dickinson. 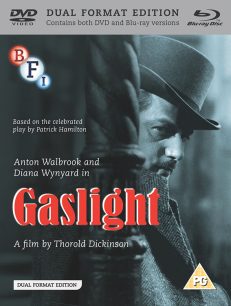