Giving It Both Barrels! Alan Goldsmith

Written from the memories of one of the last great Rock ‘n’ Roll promoters of our time, this book is the doorway to a host of amazing revelations. From national television stars who started out as strippers, to the true highs and lows in the lives of the greatest music icons in history such as Dionne Warwick, Stevie Wonder and The who. Alan Goldsmith has seen and pretty much done it all; his time as a promoter gave him the inside scoop on hundreds of stories, including never before revealed Nazi secrets as told to him by one of Hitler’s greatest fighter pilots, and the unmentioned dark secrets of the Suffolk town hall. This book sets the record straight and spills the beans through an amusing and fascinating recollection of events that have occurred throughout Alan’s life, which has been fast paced, electric and at times can only be described as truly unbelievable. But one thing that’s certain is that every story in this book is the truth, the whole truth and nothing but the truth, although once you start reading you may struggle to believe it!

What the critics said:
“A real page turner! A brilliant read for anyone interested in pop history.”
“The best history of rock n roll I have read. Five stars!”
“The book has an air of authenticity that leaves you in no doubt all the things the author recounts really happened.“
Autobiography Book Offer: £12.99 with free postage
Signed by the author Alan Goldsmith
Written from the memories of one of the last great Rock’n’Roll promoters of our time. 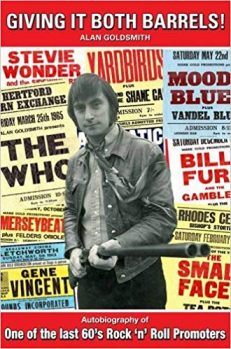 You're viewing: Giving It Both Barrels! Alan Goldsmith £12.99
Add to cart