From the 1920s to the 1970s, we present a journey through Britain, travelling via road and rail. We encounter famous faces and enjoy fashion styles, transport and events of the time. Further afield we make a trip to Europe, the USA and Australia. There’s something for all interests and tastes, including horticulture, animation and music.

1930s Car Racing Around the World A visit to classic race tracks.

England in 1929 Dover to London, Hyde Park, Drury Lane and beyond.

London Docks and The River Thames (1950)  The Port of London.

Miss Bikini Made around 1951, a look at the new style of swimsuit.

Stars on Parade (1948) Morden Hall Park, a party with the stars!

The Apollon, Newcastle (1957) Footage of the Apollon Cargo ship.

Ancient Stones (1948) The history of our Churches.

Bridlington in 1936 Bempton, a pony and trap ride and a ferry trip.

Canterbury Remarkable shots of Canterbury in the 1930s.

Development of the English Railways (1936)

The evolution of the English Railways from colliery freight trains.

How Talkies Talk (1935) How sound is recorded in ‘talking’ pictures.

Kent in the 1970s Shops, fashion styles and a young Prince Charles.

Helford Oysters 1950s, the journey from the oyster beds to delivery.

Torquay in 1933 A journey around the local coastline.

The Tufty Club Early animation on swimming at the seaside.

How a Bicycle is Made A 1940s film about Raleigh bicycles.

King of the Keyboard 1943 The great English pianist, Arthur Dulay.

Sussex Fortnight (1950)  A trip by bicycle through Sussex.

The History of the Record Industry – It’s in the Groove! (1949)  The record industry, from the phonograph to LP & single.

1920s Windsor A fascinating insight into Windsor between the wars.

Crystal Palace, the Great Fire of 1936 Amateur footage of the fire.

Devon in the 1950s A nostalgic coastal trip.

Glimpses of 1950s Devon Plymouth, Looe and a trip to Fowey.

Padstow & Newquay Captured in colour by an amateur cameraman.

John and Betty and the Magic Dog The perils of crossing the road.

A London River Bus trip in the late 1940s Tower Bridge, The Tower of London, St Paul’s, Waterloo Bridge and the Houses of Parliament.

The Nine Elms Locomotive Shed 1960 A tour of the famous depot.

Snipshots An early silent animation made in 1935.

Ancient Cathedrals English cathedrals in the 1920s and early 1930s.

Safety First in 1938 The survival of British plants in harsh winters.

The British Salmon Fishing Industry 1940s From stream to plate.

Seeing Motorcycles 1970s film on the perils of being a motorcyclist.

A 1960s Driving Lesson Filmed around Wiltshire in a Morris Minor.

Glimpses of Blackpool in 1974 A trip to Blackpool and Preston.

Ireland In the 1940s People, traditions and industries.

Learning to Live The education system in Britain in 1941.

Liverpool & London in 1930 A nostalgic journey in an Austin 7.

London in the 1960s A fantastic snapshot documentary.

Motor Salesmanship in the 1930s Inside British Motor Factories.

The New ‘Light Orchestras’ of Radio in 1939 A Golden Age.

Speed Easy Early ’70s, a film on riding a motorcycle in Ireland.

Storing Vegetables Outdoors 1941 How to build an outside larder.

The History of the Movies A fascinating 1950s insight.

The Telephone at Work 1970s film, features a host of familiar faces.

The Voice of Experience – If I Could Sing Again1930s crime short which features ‘The Radio Announcer’, a voice recognised by millions. London in the late 1930s/1940s Amateur footage with many of the familiar iconic landmarks, plus some period ‘people watching’ footage. 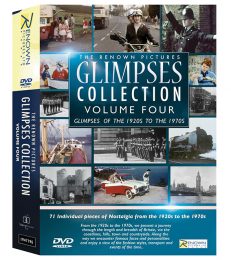