Robert Powell reprises one of his most famous roles, that of Edwardian adventurer Richard Hannay, in this hit drama series spinning out of John Buchan’s thrilling tales of derring-do most famously, the classic novel The Thirty-Nine Steps. This release comprises both action-packed series, with guest appearances from Martin Clunes, Alex Kingston, Charles Gray, Oliver Cotton, Phyllis Logan, Iain Cuthbertson and Anthony Valentine.

Having forged a successful career as a mining engineer, prospector and military intelligence officer in South Africa, Richard Hannay returns to Britain amid the mounting tensions of pre-First World War Europe. His plans to settle down are dashed, however, when the naval arms race between Britain and Imperial Germany enters a dangerous new phase and his ingenuity is stretched to its limit by the ever-inventive schemes of his ruthless arch-enemy, Count Otto von Schwabing…

All 13 episodes of this exciting 80s drama series in this
4 DVD Box Set!

Our Price £20 with free UK Postage 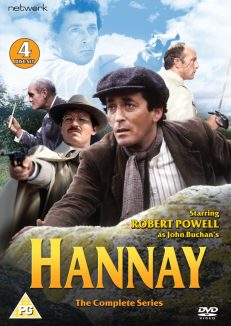