Happy Ever After, The Complete Collection

Happy Ever After, The Complete Collection.
7-DVD Set

The pilot, all five series and two Christmas specials from the classic sitcom, precursor to Terry and June.

The exploits of TV’s happiest hapless couple. Terry and June, (Terry Scott and June Whitfield), are middle-aged, middle-class and live in middle England. The children have left home, but domestic bliss is interrupted by the arrival of scatty Aunt Lucy (Beryl Cooke) and her mynah bird. Terry’s boyish enthusiasm for hobbies and schemes invariably bring chaos and calamity. Luckily, June has the patience of a saint  – most days!

June Whitfield and Terry Scott began their TV partnership in 1968 in Scott On, but it was Happy Ever After,  and the subsequent Terry and June, that created a husband-and-wife team in the minds of millions of viewers, some of whom believed that they were married in real life. Happy Ever After began as an episode of Comedy Playhouse which established middle-aged couple Terry and June Fletcher, alone following the departure of their two grown-up daughters. Their freedom was short-lived, as an aged relative – dotty Aunt Lucy – moved in. Although daughters Debbie and Susan dropped in from time to time, the episodes mainly focused on this ill-fitting trio. Terry was headstrong, foolhardy, incompetent and obsessive. When he hit upon an idea he followed it through to its illogical conclusion regardless of the consequences. As a result, June had to mother Terry as much as be his wife, keeping her feet on the ground and remaining patient and tolerant up to the point where he had to be stopped. This original series, by a team of writers headed by Eric Merriman and John Chapman, is considered by fans to be superior in scope and wit. 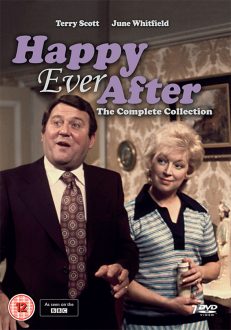 You're viewing: Happy Ever After, The Complete Collection £25.00
Read more