Hardback Book: Tommy Steele – A Life in the Spotlight

Hardback Book:
Tommy Steele – A Life in the Spotlight

The Authorised Biography by Sebastian Lassandro

In the summer of 1956, while on shore leave from the Merchant Navy, Thomas Hicks was spotted playing music in a London coffee bar. Nothing like this ‘rock’ had previously been heard in Britain and he became an overnight sensation, never returning to his ship. He changed his name to Tommy Steele and, for 65 years, he has been Britain’s greatest showman. In a remarkable career spanning radio, records, Broadway and Hollywood, Steele started the rock revolution in the UK before moving to lighter family entertainment and becoming a well-loved household name. He received an OBE for Services to Entertainment in 1979 and a knighthood for Services to Entertainment and Charity in 2020. Steele conquered the West End, Hollywood and Broadway; he holds records for the longest-running one-man show in London’s West End; and the record for most appearances at the hallowed London Palladium. He appeared in Kill Me Tomorrow, Light Up The Sky, The Duke Wore Jeans, Half a Sixpence and many more. However, his remarkable career has never been detailed comprehensively – until now.

Authorised by Sir Tommy Steele OBE himself, A Life in the Spotlight offers a detailed insight into the career of an unrivalled entertainment legend with stories, details and anecdotes never before seen in print. Foreword by Sir Tim Rice with contributions from Petula Clark, Dame Judi Dench, Elaine Paige and Paul Nicholas. 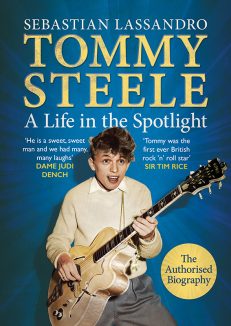 You're viewing: Hardback Book: Tommy Steele – A Life in the Spotlight £27.00
Read more