Here’s Harry (1960–65), with a writing team led by Vince Powell and Harry Driver (Bless This House, Love Thy Neighbour), cemented Harry Worth’s popularity. In each episode Worth is pitted against figures of petty authority such as customs officers, railway staff, doctors, lawyers or policemen, who are increasingly exasperated by his unfathomable babbling. His amiable but bewildered persona became a much emulated comedy template.

60 episodes of Here’s Harry were broadcast, but only 11 have been recovered from the BBC archives, with storylines ranging from comical attempts to book a holiday, celebrate a birthday or arrange an overdraft, to the accidental theft of a policeman’s bicycle. The supporting cast includes sitcom stalwarts Gerald Anderson, Deryck Guyler, Reginald Marsh, Vi Stevens, Pat Wallworth, Leonard Williams, Sam Kydd and Jack Woolgar.

Like many early TV stars, Harry Worth started out in variety theatre. Originally a ventriloquist, he toured for two years with Laurel and Hardy towards the end of their careers and they suggested he ditch the dummy and become a stand-up comic. The resulting stage persona, bumbling and always slightly out of sync with the world, also became the basis for his TV career. His first TV series, The Trouble with Harry (1960), cast him as a would-be novelist. However, his second series, Here’s Harry (1960-65), established his popularity and cast the mould for the remainder of his TV career. The show’s weekly premise was for Worth to confront some form of authority and watch the fallout. His bewildered but cheerful character was a huge hit and in acknowledgement of his popularity Here’s Harry was renamed Harry Worth midway through its ten-year run. The show is best remembered not for its plots, but for its novel opening title sequence, in which the star used his reflection in a Manchester shop window to create an optical illusion with his arm and leg which made him appear to float in mid-air. It became a national craze, with people copying Worth outside department stores across the country.

Episodes: The Bicycle; The Holiday; The Request; The Medals; The Voice; The Dance; The Plant; The Birthday; The Overdraft; The Last Train and recently discovered episode The Musician. 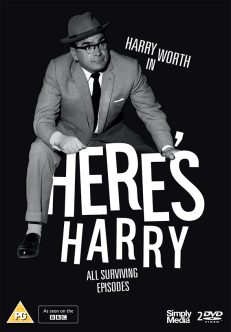 You're viewing: Harry Worth in Here’s Harry £20.00
Read more