View cart “The Renown Comedy Collection Volume 3” has been added to your cart.

All 22 episode from both series.

Nicholas Ball plays Hazell, a tough, charismatic private detective in this hit Thames series. First aired in the late 1970s, it was based on the Hazell novels, co-written by journalist and novelist Gordon Williams, together with Terry Venables, then future England.

Hazell the series was influenced by classic film noir and featured rounded characterisations, witty Cockney dialogue and credible action scenes, all set in the kind of seedy London locations that would be revisited in Minder – the series created by screenwriter Leon Griffiths following his work on Hazell. Terry Venables is credited with writing two episodes, Gordon Williams wrote five and under their combined pseudonym, P.B. Yuill, the pair wrote 15 episodes.

Following the curtailment of his police career after an injury and subsequent slide into alcoholism, the newly reformed James Hazell sets himself up as a private eye. Utterly ruthless when he needs to be, Hazell is also blessed with a breezy charm, effortless style, robust sense of humour and the ability to think on his feet; vital when tackling blackmail, missing persons cases, organised crime and the drugs trade… and when faced with his dour Scottish CID adversary ‘Choc’ Minty (played to perfection by Roddy McMillan). 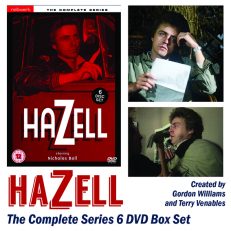