Honey West was the first female detective to be featured in a weekly American television series, starring Anne Francis. Box set of 3 DVDs.

The character first appeared in a series of novels by G.G. Fickling. Honey inherited the family detective business from her father. Her partner, Sam Bolt (John Ericson), was also included in the deal, and the love of Honey’s life was her pet ocelot, Bruce.

Honey made her first TV appearance in Who Killed The Jackpot?, an episode of another quirky detective series, Burke’s Law in April 1965. This TV debut appears on this four disc DVD collection alongside all 30 episodes of Honey West.

In spite of having episodes produced by Aaron Spelling and using some of the top scriptwriters in Hollywood, Honey West only lasted one season. This box set is a tribute to this stylish, cool and tongue in cheek show which blazed a trail for female felony investigators.

Episode titles: The Swingin’ Mrs. Jones; The Owl and the Eye; The Abominable Snowman; A Matter of Wife and Death; Live a Little… Kill a Little; Whatever Lola Wants….; The Princess and the Paupers; In the Bag; The Flame and the Pussycat; A Neat Little Package; A Stitch in Crime; A Million Bucks in Anybody’s Language; The Gray Lady; Invitation to Limbo; Rockabye the Hard Way; A Nice Little Till to Tap; How Brillig, O, Beamish Boy; King of the Mountain; It’s Earlier Than You Think; The Perfect Un-Crime; Like Visions and Omens and All That Jazz; Don’t Look Now, But Isn’t That Me; Come to Me, My Litigation Baby; Slay, Gypsy, Slay; The Fun-Fun Killer; Pop Goes the Easel; Little Green Robin Hood; Just the Bear Facts, Ma’am; There’s a Long, Long, Fuse A’Burning; An Eerie, Airy, Thing. 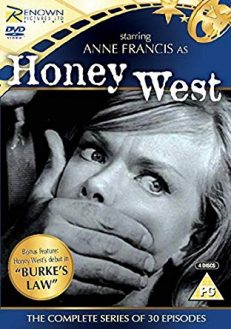