View cart “Under Your Hat” has been added to your cart.

House Of Blackmail / Matter Of Murder / The Six Men

The House of Blackmail (1953)
The story of an innocent hitch-hiker who takes a ride into danger when he accepts a lift from a woman who is being blackmailed…
Director: Maurice Elvey
Starring: Mary Germaine, William Sylvester, Alexander Gauge

The Six Men (1953)
The â€˜Six Men` are a gang of six criminals that Scotland Yard is unable to pin a charge against even though they are positive of the identities. A great little British Crime Drama shot in just Ten days, tracing the activities of the gang of crooks whose long run of successful coups has the police in a panic.
Director: Michael Law
Starring: Harold Warrender, Olga Edwardes, Peter Bull 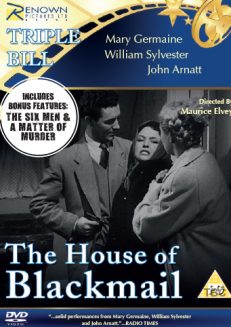