View cart “How I Won the War Dual Format Edition DVD and Blu-Ray” has been added to your cart.

How I Won the War

Hapless commander Lieutenant Goodbody (Michael Crawford) enthusiastically leads his troops on the battlefields of World War Two, including the calamitous installation of a cricket pitch behind enemy lines… With John Lennon in his only non-musical screen performance, How I Won the War is a biting satire on war and the war movie, a unique cult comedy.

Plod (1971, 21 mins): long thought lost, an anti-authoritarian fusion of poetry and pop music shot on the streets of Liverpool, starring The Scaffold. Richard Lester in Conversation with Steven Soderbergh (1995, audio): the director discusses his career in an interview recorded at the NFT. 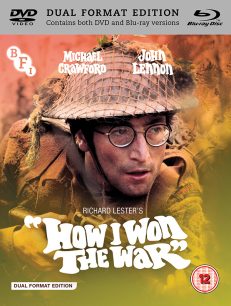 You're viewing: How I Won the War Dual Format Edition DVD and Blu-Ray £15.00
Add to cart