Hugh and I Series 1 & 2 The Remaining Episodes on DVD

Hugh and I Series 1 & 2
The Remaining Episodes on DVD

Young bachelor, Terry Scott (Terry and June) lives with his mother in Tooting. He passes his days dreaming of easy wealth – no hard work required. Simpleton Hugh Lloyd, (Hancock’s Half Hour), is Terry’s lodger. When he’s not hard at work at the local aircraft factory, he whiles away his free time getting haplessly roped into Terry’s get-rich-quick schemes.

This hilarious sitcom sees the unlikely twosome encounter all sorts of scrapes and mishaps as bully boy Terry pursues wealth and glory, with the kind but dim-witted Hugh trailing along behind.

The two actors had previously worked together on stage for many years, which created a comic rapport between them. Produced by master of the sitcom, David Croft, who was also responsible for co-writing Dad’s Army, Are You Being Served?, It Ain’t Half Hot Mum, Hi-de-Hi and ’Allo ’Allo; the series was written by John T. Chapman with extra material from John Junkin. The show ran for seven seasons, from 1962 to 1967.

Episodes: Fully Incomprehensive; A Brace of Peasants; Here Comes the Bride; Royal Visit; A Fete Worse Than Death; A Dog’s Life; Putting On the Ritz; Love Thy Neighbour; Lost Property; Trad Fad Lloyd; Wedding Bells; April in Paris; Prison Visitor; The 19th Hole; Turn for the Nurse; Where There’s a Will; A Sink of Iniquity; Holding the Baby; The Root of All Evil and A Place in the Sun.

“Very successful pairing that drew on Laurel and Hardy” – Comedy.co.uk 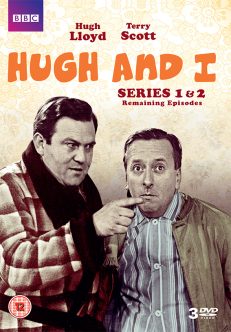