Volume 1 gathers together 14 films from 1934-1940 and provides a fascinating insight into Jennings’ early days as a filmmaker, learning and developing his craft. Features include the acclaimed Spare Time and London Can Take It! as well as previously neglected works, many of which are available for the first time since their release.

From the British Film Institute, One of Britain’s GREATEST Filmmakers 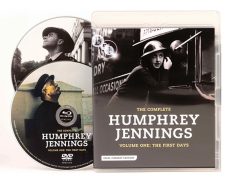