Extras: This is England (1941, 10 mins): alternate cut of The Heart of Britain. I Was a Fireman (1943, 74 mins): Jennings’ original cut of
Fires Were Started. Illustrated booklet featuring essays, film notes and biographies by Lindsay Anderson, Patrick Russell and Kevin Jackson.

From the British Film Institute, One of Britain’s GREATEST Filmmakers 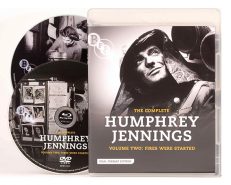