It Came From Outer Space

It Came From Outer Space

Amateur astronomer John Putnam (Richard Carlson) and his fiancé Ellen Fields (Barbara Rush) are stargazing in the desert when a spaceship bursts from the sky and crashes to the ground. Just before a landslide buries the ship, a mysterious creature emerges and disappears into the darkness. When he tells his story to the sheriff (Charles Drake), John is branded a crackpot; but before long, strange things begin to happen, and the tide of disbelief turns… Based on a story by  acclaimed writer Ray Bradbury, It Came From Outer Space is a science-fiction classic that is as thought provoking and tantalising today as it was when it first landed on the silver screen.

BONUS FEATURES Commentary with film historian Tom Weaver. The Universe According to Universal: A documentary on It Came From Outer Space.
Theatrical Trailer. Photograph and Poster Gallery. 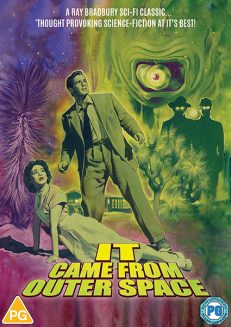