It’s In The Bag, plus featurette, Miss Mctaggart Wont Lie Down

It`s In The Bag

â€œOne of the 75 Most Wanted films listed by the British
Film Institute as Missing, believed lostâ€.

Cockney sisters Gert & Daisy, (Elsie & Doris Waters) find that an old dress left to them by Granny has -£20,000 sewn in the bustle – but they have just sold it!

Gert and Daisy were the creations of real-life sisters, Doris (1899-1978) and Elsie Waters (1893-1990), who in subsequent decades were increasingly remembered as being the siblings of Jack Warner (Dixon of Dock Green himself), yet they
were very much the bigger stars during the war. Doris and Elsie had cultivated a successful career for over a decade before the war, having been hot-housed from an early age in the family band, the E.W. Waters Bijou Orchestra.

Elsie and Doris were awarded OBEs in the King`s Birthday Honours List in 1946.

â€œBarbara Mullen is on fine form as a spirited woman who returns to her native
village, only to discover she`s just died!â€ BRITMOVIE

Jean Mactaggart returns
home from Glasgow to the small Scottish village of Kenmore, only to be greeted
by the strangest looks from the startled locals. Jean discovers that whilst she was staying in Glasgow, her twin-sister visited Kenmore, passed away, and
was mistakenly buried as Jean. When Miss Mactaggart attempts to correct the records, she comes up against a stubborn bureaucratic system that insists she is theoretically and legally dead. 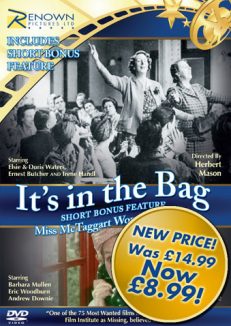 You're viewing: It’s In The Bag, plus featurette, Miss Mctaggart Wont Lie Down £8.99
Add to cart