It’s Not Cricket is a hilarious post war comedy produced by one Britain’s finest comedy talents, Peter Rogers, and his future wife and probably the finest female producer of her generation, Betty E. Box.

Major Bright (Basil Radford) and Captain Early (Naunton Wayne) are two hapless British army intelligence officers in post- war Germany. Sent back to England for a spot of leave they fail to notice that their new batman is actually war criminal Otto Fisch (Maurice Denham). When he vanishes, the two officers are demobbed.

Back on Civvy Street our two heroes set up a private detective agency, “Bright and Early”. When they are invited to a weekend country house party for a cricket match they stumble across a robbery plot involving a diamond that Fisch has stolen. Will the two detectives finally catch Fisch and recover the diamond? 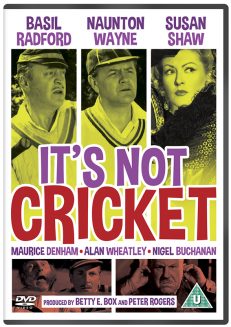