Jailbirds (1940)
Charles Hawtrey stars as Nick, a prisoner who escapes along with Bill (Albert Burdon) dressed in drag. Both get jobs in a bakery where they hide some stolen jewellery in a loaf ! Hawtry at his campest best.

Sailors Don`t Care (1940)
Boat-building father and Son Nobby Clark (Edward Rigby, Tom Gamble) join the River Patrol service.
They are vamped` by two nightclub girls who are spies. Manning a listening post on the ship Terrific` Joe and Nobby see a parachutist landing in the river with a time bomb in his hands… 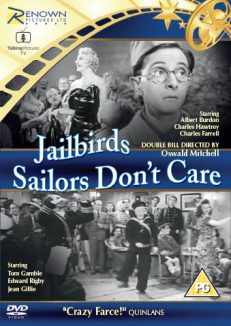