Inspired by the Brighton Trunk Murders in the 1930`s, written and directed by Val Guest, this 1962 British Production starring Jack Warner as Detective
Inspector Fellows is filmed in and around Brighton.

It`s a taut murder mystery and is not the usual Dixon of Dock Green cosy role for Warner.

A woman is murdered and Fellows, aided by Det Sgt Wilks, (Ronald Lewis) sifts through the clues and suspects to complete the â€œJigsawâ€ and find the killer.

â€œWithout Sensationalism, Val Guest has spun a first rate detective thriller which has the authentic stamp of a documentary in its attention to detailâ€. VARIETY REVIEW – SEPTEMBER 5, 1962 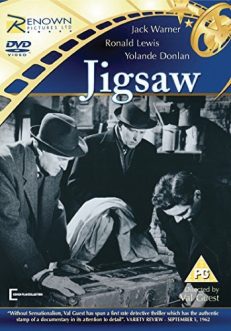