THE MAN THE MYTH THE MOVIES

This is the first book about John Guillermin’s life and films to be published. Award-winning film critics, directors, film archivists and professors of film examine the thought and creativity of his directing and help answer the question of why you may not be more familiar with his work.

If you have seen The Towering Inferno, King Kong or Death on the Nile, you are familiar with the directorial work of John Guillermin. But there are many other thoughtful gems directed by this English-born Frenchman who was nicknamed “The Wild Man.” His personal favourite was Rapture, a Brittany-based psychological drama that was largely overlooked on its first release in 1965 but is now perceived as a bold and original film by a master of his craft.

Lavishly illustrated and offering new critical appraisals of his key films from the 1950s to the 1980s, the book includes a never before published autobiographical essay and unique and invaluable insights by his widow, Mary, into the personality of a fascinating filmmaker.

A full appreciation of his impressive body of work is long overdue and this book will delight and inform enthusiasts and film scholars alike. It offers fresh insight not only into this director, but also into the history of film-making and the British and US film industries of that time.

By the end of his life, John Guillermin had made a significant contribution to the world of film. Rapture was re-released in the US and the UK and gained reviews recognizing it as a masterpiece. Renown Pictures and the BFI brought out several of his early films. More and more of his films became available to buy. There were no books about John Guillermin the director, however, despite his 36 feature films.

Very soon after he died, John’s wife Mary decided there needed to be a book about his films. Working with Neil Sinyard, co-editor of the British Film Makers series, she nurtured the idea of a book reassessing John’s films and contribution. Mary wanted the book to be more than a book of film criticism. She wanted film lovers to know the funny, passionate, deep-feeling man, who was larger than life and full of vitality. A man of character who was passionate to the very end. The book became an interweaving of the personal with discussion of the films. As Neil Sinyard says in his preface: “Very few critical studies of film directors are also a love story. This one is.” 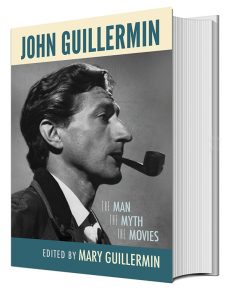