LARGE FORMAT PAPERBACK BOOK with photographs, signed by the author.

Showbiz writer and broadcaster John Hannam is about to release his fourth and final book in his The John Hannam Interviews series. It follows on from his books on Pop Stars of the 50s and 60s, Stars of Stage and Screen – Past and
Present and The Wight Connections. The new one is called More Wight Connections.
The latest book, has a foreword by Level 42 star Mark King, and includes chapters on many showbiz stars who have connections with the Isle of Wight.

He has spent the last 40 years working as a freelance showbiz journalist/broadcaster, conducting over 4000 interviews. 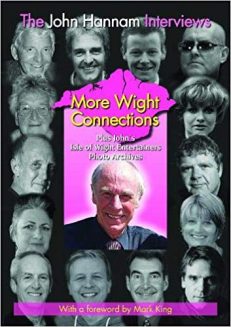