Born in Wisconsin in 1909, Joseph Losey studied medicine and English. He drifted to New York City, where he became involved in the theatre and worked with the German playwright Bertolt Brecht. He caught the attention of MGM and started making short films such as A Gun in His Hand (1945). Losey directed his first feature film in 1947 for RKO, The Boy with Green Hair. Several other films followed, establishing him as an inventive, individualistic director, including The Big Night (1951), starring John Barrymore, a brutal coming-of-age story. In 1951, Losey was summoned to testify before the House Committee on Un-American Activities (HUAC) while he was shooting Imbarco a Mezzanotte in Italy. His links with left-wing theatre groups and the concern for social justice expressed in many of his films attracted the attention of the Committee and led to him being blacklisted in America.

Seeking exile in Great Britain Losey began rebuilding his career. His first British feature film, The Sleeping Tiger (1954), was credited at the time to Victor Hanbury, and marked the beginning of a long-lasting collaboration between the director and Dirk Bogarde. Cast: Dirk Bogarde, Alexis Smith, Alexander Knox, Hugh Griffith, Patricia McCarron, Maxine Audley, Glyn Houston, Billie Whitelaw. In 1960, now well established in the UK, Losey began to look for more adventurous projects, one of which was The Criminal, starring an impeccable Stanley Baker as an underworld kingpin. The score of the film was composed by John Dankworth, whose career became linked with that of Losey. Cast: Stanley Baker, Sam Wanamaker, Grégoire Aslan, Margit Saad, Jill Bennett, Rupert Davies, Laurence Naismith.

In 1970, Losey directed The Go-Between, a costume drama starring Julie Christie and Alan Bates, which won the Palme d’Or at the 1971 Cannes Film Festival and is considered to be one of his best works, his third film with Harold Pinter. Cast: Julie Christie, Edward Fox, Alan Bates, Margaret Leighton, Michael Redgrave.

OUR PRICE £30 with Free UK Postage 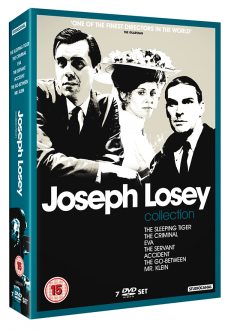