A Dual Format Edition collection bringing together the career-defining work of Ken Russell at the BBC. Russell’s work during the sixties for award-winning arts documentary series’ Monitor and Omnibus was critically acclaimed and often seen as a high point in his filmmaking.

Delius: Song of Summer (1968) is generally regarded (not least by its director) as Russell’s best television film – with many critics citing it as his finest work in any medium. The story traces the life of Eric Fenby and is based on his memoirs of being artistic assistant to the blind and paralysed composer Frederick Delius. Cast: Max Adrian, Christopher Gable, Maureen Pryor, David Collings, Geraldine Sherman. 73 mins, black and white. 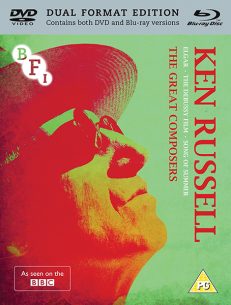