View cart “The Ronald Shiner Collection: Beauty and the Barge/Keep It Clean” has been added to your cart.

Henry Hathaway’s directorial skills bring a heightened sense of realism to this classic 1947 film, which marked Richard Widmark’s debut. When a small time crook (Victor Mature) gets a twenty year sentence for robbery, he refuses to reveal his accomplices, even after a D.A. (Brian Donlevy) offers to help him. But he changes his mind once he learns that his wife has committed suicide and a psychopath (Widmark) has threatened his children. 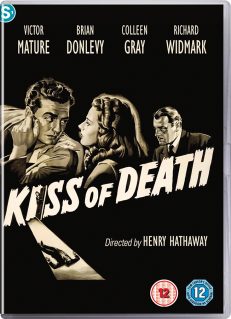