LAST EMBRACE AND KISS OF DEATH 2 DVDS FOR £20

LAST EMBRACE AND KISS OF DEATH 2 DVDS FOR £20

A taught thriller, made in 1979, from Jonathan Demme, acclaimed director of Silence of the Lambs, starring Roy Scheider (Jaws, The French Connection) as Harry Hannan, an ex-government agent fearing for his life and unable to trust even his closest friends after the violent death of his wife. Infused with the spirit of Alfred Hitchcock and featuring outstanding performances by John lover, Christopher Walken and Charles Napier, Last Embrace is a stylish, edge-of-your-seat experience that you will never forget.

Henry Hathaway’s directorial skills bring a heightened sense of realism to this classic 1947 film, which marked Richard Widmark’s debut. When a small-time crook (Victor Mature) gets a twenty year sentence for robbery, he refuses to reveal his accomplices, even after a D.A. (Brian Donlevy) offers to help him. But he changes his mind once he learns that his wife has committed suicide and a psychopath (Widmark) has threatened his children. 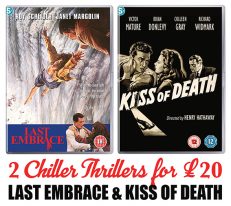