The films in this 4-DVD set, Volume 1, are concise and beautifully shot.  The ‘slice of life’ colour featurettes presented cinema-goers with varied aspects of British life, and among the documentaries included here, several vividly capture the vibrancy and optimism of the ‘Swinging Sixties’. Digitally restored from the original film elements, this release includes 54
memorable films which offer a fascinating snapshot of transport in 1960s Britain, many unseen since their first screening.

Ticket to Tokyo Travel on a Britannia airliner. Letting Off Steam British Railways modern age. New Roads for Old Tomorrow’s roads. Flight on a Cushion Story of the hovercraft. Talking of Coaches… A coach tour of Italy. Alpine Rescue Hazards faced by Swiss pilots. Shopping for a ‘Queen’ The ‘Queen Elizabeth’. Sailing the Sky The thrills of gliding. Driving Test Driving school tuition. Shape of a Ship A look at the big new liners. Air Hostess The working day of an air hostess. Taxi! Taxi!! Organisation behind taxis. All Through the Night Out on the trunk roads.  Over and Under Bridge building in Britain. Horsepower Riders Safety on a motorcycle. Eyes of the Law Traffic control in Germany. Scooter Commuter In ten years, scooters on Britain’s roads increased to over 41,000. Sea Horses Little tugs, mainstay of the ports. So They All Hover Now  Today all kinds of things hover – trucks, barrows, even stretchers! The Village Sleeps Again Building a by-pass. Birdmen The first man to pedal through the air. Draw the Fires Railway modernisation. The Car Has Wings Natural boundaries no longer limit the range of motoring. Vintage Models A visit to Montague Motor Museum at Beaulieu in the New Forest. Pilot Aboard Britain’s pilot services. Where No Tide Flows A look at our canals. High, Wide and Faster Co-ordination between roads, railways and shipping facilities. Oil Aboard  The oil tankers and their crews. Report on a River Modernising port services and keeping traffic moving on the Thames. Europe Grows Together Continental links. Turn of the Wheel What happens to old trains and buses when they are replaced? City of the Air London Airport in the BOAC era. Behind the Ton-Up Boys There were nearly two million motorcyclists in Britain. Going Places Under Water The story of the world’s first underwater sightseeing bus. Living with Cars What was done to cope with the increasing number of cars on the roads? Flying to Work Private planes and helicopters. The Spirit of Brooklands The story of the renowned motor racing circuit. Weather Adviser Special ships maintain a constant scientific watch on the weather. What Price Safety? How to make roads safer? Down in the Dumps Problem of dumped cars. Cats of the Sea The thrill of sailing catamarans. Breaking the Ice The icebreakers responsible for keeping shipping routes open. Skimming Through the Sixties The hovercraft. The Big Take-Off British aircraft industry. Lighter Than Air Going up in a hot air balloon. Just an Accident Daily death on the roads. Scrambling for It A popular sport. The Straits of Dover Every day, 750 ships pass through the five mile wide shipping channel. Where Do You Leave the Boat? Pleasure boats and the problem of where to keep them. Pushing the Bike The bike’s impact. Playing Trains  Running steam  locomotives. The City’s  For Living In Impact of traffic. All in a Day’s Work People who travel by air as part of an everyday job. A Load of Pheasants Intercontinental deliveries by lorries that travel via Britain’s ports. 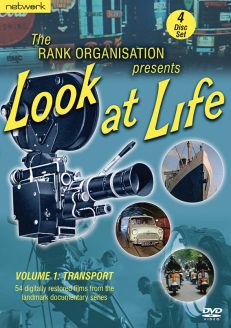