The films in these box sets are beautifully shot and marvellously concise.  The ‘slice of life’ colour featurettes presented cinema-goers with varied aspects of British life. Digitally restored from the original film elements, Volume 2 presents 45 memorable films offering fascinating insights into varied aspects of British military life, with many unseen since their first screening. From the daring acrobatics of the Black Arrows to military survival techniques and from sea mine clearance to the valour of  Victoria Cross holders – this exceptional three disc set features coverage of significant military achievements throughout the 1960s.

The Black Arrows The acrobatic team who performed daring manoeuvres in jets capable of more than 700mph.
Ceremonial Soldier As we see, the sentries at Buckingham Palace are still highly efficient soldiers.
Soldier Abroad A soldier’s life at the HQ of the Third Royal Tank Regiment in Detmold, West Germany.
Under the Rocket Life at the rocket range in Woomera, Australia, through the eyes of a young REME corporal and his wife.
Thunder in Waiting The deadly cargo of the Vulcan Bomber is a crucial part of Britain’s deterrent force.
A Piece of Cake A film about the parachutists of the RAF.
Return to Arms A study of the new West German army.
Submarine A glimpse of life and work in a submarine.
The Rocket-Age Lancers Looking to the future with the 9th Queen’s Royal Lancers.
Air Umbrella A look at NATO’s international squadrons, with footage of the F104 Starfighter.
Flight Deck The aircraft carrier is now the nerve centre of any large naval operation.
Pipeline Refuelling both in the air and at sea.
Girls Ahoy! Formed in wartime, the Women’s Royal Naval Service is still going strong.
Survival A look at survival techniques with Peter Whittingham and RAF expert Jock Wishart.
Muscle Men A fast-moving film with enough vigour to prove that muscle and brawn still count!
Action This Day The tough training of the Royal Marine Commandos – some of Britain’s finest fighting men.
Char and Wad The work of the NAAFI – from Kuwait to Gibraltar, Germany to Cyprus.
Test Pilot A look at the RAF Lightning, supersonic watchdog of Britain’s skies.
Rendered Safe A look at the work of a bomb disposal squad.
The Last Battleship The life and death of HMS Vanguard, and the uses to which her steel will be put.
Amphibian A look at the DUKW and other amphibious military craft.
Turning Blades The world of the helicopter in 1962; from the Belvedere to the experimental Rotodyne VTOL craft.
Plumbing the Depths A film showing the importance of surveying the world’s seas and oceans.
Golden Wings A look at various aircraft, including the Blackburn monoplane, the Sopwith Pup and the Hart.
The Black Watch The Queen Mother visits the Black Watch on the banks of the Tay.
Girls of the Air The girls behind the men who fly: members of the WRAF.
The Sky’s the Limit Aerobatics, born of necessity in World War I, now form part of the RAF’s training.
Forward, March! The infantryman is the indispensable soldier of the British Army.
Doctor On Call A look at a remarkable flying doctor service based near Kuala Lumpur.
Trouble-Shooters A film showing Britain’s trouble-shooters, the Royal Marines, in Sarawak.
Under One Umbrella The story of how three fighting services were united under one command – the MOD.
The Price of Valour An insight into the lives of some of the holders of the Victoria Cross.
The Jet Folk We see the impact of the United States Third Air Force, stationed in Britain.
Drummers of the Queen A look at the little-known Junior Guardsmen’s Company.
The Flying Soldier A look at helicopter training within the British Army.
The Cherry-Pickers Following the 11th Hussars from Hanover to Coburg.
Jumping Jets The revolutionary vertical take-off capacity of the RAF Kestrel.
Air Lift How transport command of the RAF keeps Zambia’s economy alive.
Down to Earth Following WRAF girls as they trek into the jungle.
East of Suez More than 50,000 British soldiers, sailors and airmen police the rivers and jungles of Borneo.
School for Skymen A glimpse into the world of the RAF College at Cranwell.
Moving Day How the headquarters of NATO was moved from France to Belgium.
Free Fall The story of the Falcons – free-fall professionals.
Jumping for Joy The story of the Royal Green Jackets Skydiving Team.
Underwater Menace Dealing with the hazardous legacy of World War II. 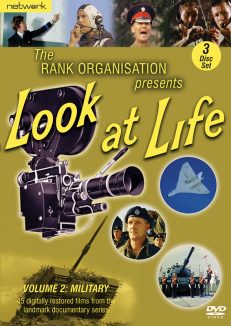