The films in these box sets are beautifully shot and marvellously concise.  The ‘slice of life’ colour featurettes presented cinema-goers with varied aspects of British life. Digitally restored from the original film elements, Volume 4 presents 42 memorable films, many of which have remained unseen since their first screening, with subjects ranging from Scotland’s burgeoning winter sports business to the Grand National, from mountaineering on the Matterhorn to the drama of Saturday football fever – 1960s style. Narrators include Raymond Baxter, Cliff Michelmore and Wynford Vaughan-Thomas.

JUMPING TO AINTREE
Watching the winner of the 1959 Grand National.

DERBY DAY
Going to the races on Derby Day at Epsom Downs.

KINGS OF SPEED
British racing drivers have always been at the forefront of this exciting sport. This film examines what has helped to put them in this winning position.

PONY-TALE
The story of a pony from the time it is rounded up in the forest until, with its young rider astride, it enters the Pony Club Championships – encompassing pony sales, training, and life at the riding school or with a single owner.

FOUR MEN DOWN
Following the British Olympic bobsleigh team as they practise at St Moritz.

TEN PINS DOWN
A look at ten-pin bowling in Britain today, and also oldstyle skittle alleys.

SMASHING THROUGH
A glimpse into the exciting world of stock-car racing.

SOLENT SATURDAY
A look at the fascinating water events that take place on a Solent Saturday.

SATURDAY FEVER
A look at the phenomenon of Saturday football through the eyes of fans watching Tottenham Hotspur. The film looks at the men who are the chief actors in the Saturday football drama, both off duty and in training.

OUT FOR A CATCH
A film looking at the different aspects of angling – and the tragedy of our polluted inland waterways.

AGAINST THE CLOCK
The Look at Life cameras get a behind-the-scenes glimpse at the world of car rallies.

MAN INTO FISH
The British Sub-Aqua Club holds courses in swimming pools and lakes throughout the country. Observing training both above and below the surface, this film offers a fascinating glimpse of a mysterious, little-seen world.

SKI FEVER
A look at what British skiers are doing, both at Glencoe in the Scottish Highlands and at Murren, where the British Championships provide almost as many thrills – if not such high speeds – as international events.

THE BALL AT HIS FEET
League football is a notoriously competitive profession; of thousands of players given trials every year by the top clubs, only a handful will reach the top. This film shows what it takes to get there, and why soccer remains Britain’s most popular sport.

A HUNDRED THOUSAND OARSMEN
A fascinating look at the sport of rowing.

RIDING IT ROUGH
Speedway racing is one of the many expressions of the modern thirst for speed. This film examines the sport, and also shows how cross-country riding introduced a new, spectacular hazard of man-made obstacles.

TARGET – THE STADIUM
A behind-the-scenes look at the 1962 Commonwealth Games, held in Perth, Western Australia.

FLIGHT OF FANCY
How does a homing pigeon ‘home’? This film traces the development of the birds, from fledglings to long-distance champions.

GETTING WET
A look at the rise of swimming as a sport, with civil engineer Frank Rudge, coach José Juba, swimmer Anne Cotterill and diver Margaret Austen.

SEE HOW THEY JUMP!
A fast-moving film that not only captures the thrill and elegance of the show-jumping ring but also goes behind the scenes to see how show jumpers, and their riders, are made.

IT’S A GAMBLE
Why do people gamble? To get rich? Or to escape from everyday worries for a few hours? From horse-racing to football pools, this film examines what has become a very big business indeed.

QUEUE FOR THE TEE
Once considered a rich man’s pursuit, golf is now highly popular in Britain. In this film, both famous and unknown players share the magic of a game that unites all sections of the community.

IN THE KART
A film that captures the thrills and excitement of miniature motor racing, or karting, in Britain.

OVER MY SHOULDER
This film looks at the self-defence training given to women police offi cers, and also covers three traditional Japanese martial arts: judo, aikido, and kendo.

WOMEN WITH LEISURE
A look at the popularity of ten-pin bowling, particularly among women.

RULERS OF RACING
Look at Life goes behind the scenes to take a closer look at how the Jockey Club works.

WINNING THE HARD WAY
A look at our amateur athletics, and also the need for better facilities and coaching.

BOOKIES AT THE CROSSROADS
A look at the future of Britain’s bookmakers.

HOW DO YOU SWING?
How research into the golfer’s swing is progressing.

LIVING ON SKIS
A look at skiing in Norway – part of the Norwegian way of life.

CRICKET ON TEST
From the village green to Lord’s, this film enters the world of cricket to look at the problems it faces.

ROOM AT THE TOP?
This film reveals both the excitement and the danger of mountaineering. Showing a climbing school in action in the Alps, it looks at how for some, mountain-climbing is not simply a pastime, but a lifetime’s endeavour.

OUT OF A BOMB-SITE
Cycle speedway was a game born on improvised tracks amid the rubble of the air raids. More than 20 years later, those tracks had become permanent – often built in public parks – and the pastime had become a thriving amateur sport.

BEHIND THE WORLD CUP
For the first time in the history of international football, the final rounds of the World Cup series were scheduled in Britain in 1966. This film shows the organisation behind the spectacle and its lasting benefit.

OVER THE STICKS
A thrilling picture of steeplechasing in Britain – including an effortless performance by Arkle, the greatest chaser of them all.

SEA RIDERS
The world’s toughest power-boat race takes place each year off Britain’s south coast. It’s an endurance test and a spectacle but, more importantly, it’s also a testing ground for the development of ever more powerful craft.

RACING TO THE START
A look at individuals who have made racing cars. Brian Hampshire built his Formula IV car in his mother’s bedroom; a four-man syndicate built the Piper racing car in a Kent garage; the Lotus was the brainchild of one man – Colin Chapman.

SINGLE-HANDED SAILORS
Sir Francis Chichester and Sir Alec Rose have shown what it means to sail around the world single-handed – and ten men set out to prove it can be done without any stop at all.

IT’S ODDS ON THE FISH
For some anglers, betting is now a regular feature in competitions. For others, such commercialism is unthinkable. This film considers the problems of ensuring that angling continues as a form of sport and relaxation. 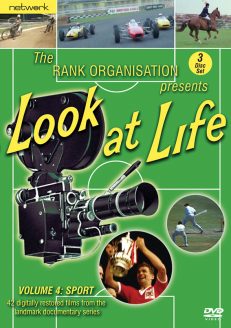