Transferred from the original film elements, this set presents 72 memorable films whose subjects range from life behind the Iron Curtain, to the Common Market to new industries in Ireland. Offering a window on the world in a period of rapid change, many of these films have remained unseen since their first screening. The narrators include: John Snagge, Martin Jarvis, E.VH. Emmett,  Antony Bilbow, Peter Scott and Roger Wesson.

THE DIVIDED CITY
A look at the two very different faces of Berlin.

OPERATION NOAH’S ARK
The building of Africa’s Kariba Dam created a vast lake, meaning death for the animals marooned on higher ground; this film shows the work done to save them.

SEAWAY
A look at the opening of the Saint Lawrence seaway.

VILLAGE OF VIOLINS
A visit to the village of Mittenwald in the Bavarian Alps, where for 300 years violin-making has been a traditional craft.

GIBRALTAR’S NEW DAY
Gibraltar has been a British outpost since 1704. This film visits the island as it prepares to become a holiday destination.

THE WIND OF CHANGE
A look at developments and achievements in Africa during the 1950s and 1960s.

POWER FOR AFRICA
A further look at Africa – in particular its increasing capacity to harness its waters.

ROLLING OUT FROM RIO
Six hundred miles inside Brazil stands the new capital Brasília, one of the 20th century’s most imaginative projects.

LADY OF JAPAN
A look at the development of Japan, and especially Tokyo.

FLAGS OVER THE TEMPLES
A look at the impact of the South-East Asia Treaty Organisation (SEATO) in Thailand.

CITY OF CRISIS
A film that takes another look at the crisis-torn city of Berlin.

A PROBLEM OF PEOPLE
A film examining the ways in which Pakistan is tackling its immense refugee problem.

EAGLE’S NEST
Berchtesgaden, in the Bavarian Alps, attracts visitors from all over the world; many come to see Hitler’s ‘Eagle’s Nest’, a feat of construction that survived World War II.

THE MAPLE HAS NEW LEAVES
A film showing the emigration to Canada of a typical English family.

CHASING THE DRAGON
A look at illegal drug trafficking in Hong Kong and the problems of heroin addiction.

THE TRAIL LEADS UPWARDS
A visit to a Native Canadian family, and a look at the construction of a new bridge across the Niagara River.

GHQ MIDDLE EAST
A mixture of the old and the new: a look at GHQ Middle East at Aden.

THE WALL
A visit to Hadrian’s Wall in Northumberland, and a more detailed examination of the Berlin Wall.

OUT OF THE SUN
A look at immigration from the West Indies into Britain.

COMMON MARKET
An assessment of the progress of the Common Market during a period in which its member countries have begun to remove trade barriers.

THE CHANGING RIVER
A film looking at the changing face of the River Rhine.

MILLIONS ON THE MARCH
Following the state visit of Queen Elizabeth II, this film looks at India’s development in terms of farming and industry.

CALL FROM THE WILD
A look at wildlife protection in North and South Rhodesia, and the development of national parks.

OUT OF THE BUSH
A look at the emerging independent countries of Africa, featuring images of life in both the village and the city.

MEN OF THE WOODS
For centuries the men of Berchtesgaden have earned their living from the trees that surround them; now mechanisation is eroding their traditional skills.

FORGING NEW LINKS
The story of Ulster began when James I obtained money from the City of London to colonise the North of Ireland. This film looks at Ulster’s role in Britain’s productivity.

GYPSY HOLIDAY
Each year, Europe’s gypsies make a pilgrimage to the Camargue – the wild corner of France where the Rhône meets the Mediterranean.

PICK OF THE BUNCH
A look at wine producing in France and Germany.

THE NEW AUSTRALIANS
A trip to Australia to see how the country is coping with its large intake of immigrants.

MEN OF THE SNOWY
Few migrants have ever found a more spectacular role than the men working together on Australia’s vast project to harness the waters of the Snowy River.

SINGAPORE IS YOUTH
A fascinating look at a modern, forward-looking Singapore.

OFF THE SHEEP’S BACK
Australia has 15 times more sheep than people, with wool providing nearly half of the country’s export earnings. But how does Australia envision its future?

CONSTANT HOT WATER
A fascinating film looking at the volcanic zone of New Zealand, and the hot water it produces.

TIDE ON THE TURN
This film looks at the economic and social impact of foreign industrialists in the Irish Republic.

MALTA MILESTONE
With the demise of the great naval dockyard, Malta has sought new ways to generate income…

WOMEN AT SEA
A look at the various seafaring jobs for women – from work on the great passenger liners, to merchant navies.

JAMES BOND’S ISLAND
A look at post-independence Jamaica, and the country’s hope to gain a firm footing in the modern world.

VOLUNTEERS FOR SERVICE
Part of the contribution made by Britain to assist newly independent countries in increasing their skills and knowledge.

MEN AGAINST THE SEA
For centuries the Dutch have fought against the sea: this film looks at the Delta Plan – a spectacular sea-defence scheme.

THE CURTAIN CHANGES
A look at the frontiers between Eastern and Western Europe.

ON TOP OF THE WORLD
A look at the changing way of life in Lapland – the vast tract of forest land that stretches across the north of Norway, Sweden and Finland, and into Russia.

SWEDISH PATTERN
Look at Life goes to Sweden to examine the country’s pioneering way of life – and potential influence on Britain.

MARKET BY THE DANUBE
A visit behind the Iron Curtain to Hungary to see how it has changed.

THE BEACH
The world’s most famous beach is the Copacabana in Rio de Janeiro. But overlooking it are the shacks of the world’s poorest people.

FACE LIFT
A tale of two cities looking at the ways in which Paris and London have set about cleaning up their appearance.

INCAS IN BOWLER HATS
The majority of the Bolivian population is Indian, with traditions dating back to the Incas. But the problem of uniting the Bolivians of Indian and Spanish descent remains..

AN ISLAND AWAKES
Sardinia was once considered a depressed area; this film looks at the changes resulting from a major development plan.

CITY OF ALL NATIONS
A visit to São Paolo in Brazil, a city which is growing continually each year.

THE SIX COME CLOSER
A close look at the European Community, showing some of the problems that the Common Market has had to solve.

JOBS WHERE YOU LIKE
A film examining one of the most exciting aspects of the Common Market: the free movement of migrant workers.

PIPELINE TO PLENTY
A look at how Kuwait is coping with its newly acquired wealth, and the provisions being made for the future.

END OF A POLISH MARCH
A look at the lives of Britain’s Polish community.

ONCE UPON A TIME…
A trip to Denmark to look at the Danish way of life.

LIVING ON A VOLCANO
Ascension Island is home to many families, who sometimes work there for up to two years.

CHINATOWN
A look at the world of the Chinese who have made Britain their home.

INSIDE RUSSIA 1: FIFTY!
A film providing a background to the achievements of the Russian people – expressed in great housing schemes, giant dams and, of course, the conquest of Space.

INSIDE RUSSIA 2: THE HEIRESSES
A look at the role of women in the Soviet Union – from helping to build new flats to running factories, driving buses to presiding over divorce courts.

INSIDE RUSSIA 3: CHILDHOOD
A film that traces the story of Russian children, through kindergarten, school and university.

INSIDE RUSSIA 4: THE WOKEN LAND
Although Siberia conjures up a picture of exile and slave labour, the new Siberia has modern cities with young populations. This film explores life east of the Urals.

WINTER BLOSSOMS
A look at the rapid changes taking place in the Algarve, with the planning of luxury development schemes along the coastline.

MAN OF THE DESERT
A look at changes taking place in Tunisia, ten years after it gained independence.

SOMETHING NEW UNDER EVEREST
Nepal, once a forbidden country, is opening up; this film offers a picture of life in one of the world’s most picturesque countries, as old customs give way to new ideas.

A NEW SHADE OF RED
A look at the changing pattern of Czech life during the upheaval of 1968.

COMING OF AGE
A film about India; what has been achieved, and what still remains to be done in the sub-continent where problems are never small ones.

HOME IS TIBET
A film looking at Tibetan refugees, and the way in which their Dalai Lama has kept the scattered community intact.

THE SINKING CITY
A look at the efforts being made to prevent Venice from sinking.

ESCAPE INTO RICHES
A look at the spiritual wealth of India – as expressed in her art and design, her music and dance, and her sculpture and architecture.

IN THE SHADOW OF THE WALL
Behind the Berlin Wall is a death-strip with electrified fences and watchtowers; this film also looks at the rebuilding of West Berlin, and the hope of reunification.

AFTER THE QUEEN’S VISIT
In 1968, the Queen paid a state visit to Chile – the first British reigning monarch to do so. This film considers what the future holds for this proud, fascinating country.

LOOK AT MAN
Look at Life visits the Isle of Man to discover why it wants greater independence. 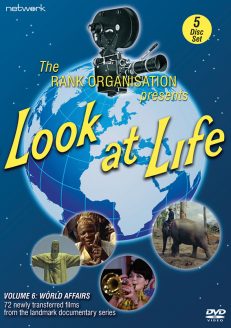