The films in these box sets are beautifully shot and marvellously concise.  The ‘slice of life’ colour featurettes presented cinema-goers with varied aspects of British life. Digitally restored from the original film elements, Volume 2 presents 45 memorable films offering fascinating insights into varied aspects of British military life, with many unseen since their first screening. From the Black Arrows daring acrobatics to military survival techniques and from sea mine clearance to the valour of  Victoria Cross holders – this exceptional three disc set features coverage of significant military achievements throughout the 1960s.

Focussing on science, Volume 3 features 45 memorable films offering fascinating insights into aspects of scientific progress and innovation that have benefited the British way of life. Many of the films have remained unseen since their first screening. Subjects include: behind the scenes of research into medicine; researching the Channel Tunnel; a look at Britain’s first spacecraft, UK3; the tapping of the vast supply of natural energy in the North Sea and the new inventions being made in Britain at the time. 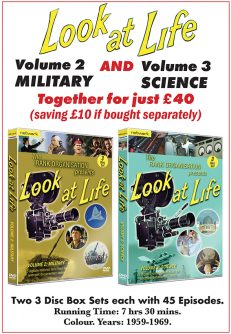