A tense drama telling the story of the kidnap of a child in 1950’s London.

(AKA Tears for Simon)

Lee and Sue Cochrane are a happily married American couple living in London with their 18-month-old son Simon. Their idyllic lifestyle is shattered when one day the family nanny takes Simon out and briefly leaves him in his pram outside a local shop. On her return, the nanny finds that Simon has been abducted. Scotland Yard, led by Inspector Craig (David Farrar) and Sergeant Lyel (Anthony Oliver), are soon on the trail of the kidnappers, their pursuit leading them down a path of danger and intrigue.

The film makes great use of locations throughout London and the South East of England and the insight into life in 1955 is fascinating. The story confronts every parent’s nightmare: what happens when you briefly look away and find your child is missing when you look back? The climax is suitably dramatic. 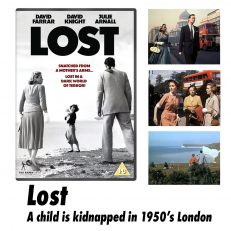