Queen of the Silver Screen

Margaret Lockwood (1916-1990) was Britain’s number one box office star during the war years.  A three-time winner of the Daily Mail Film Award, her iconic films The Lady Vanishes, The Man in Grey and The Wicked Lady gained her legions of fans and the nickname “Queen of the Screen”. During a career spanning fifty years, Margaret evolved from a film star to an Agatha Christie heroine on the West End stage, to a television icon in the 1970s series, Justice. This in-depth biography gives a fresh perspective on an independent woman, intensely private away from the spotlight, whose life was unlike anything reported in the fan magazines.

“… in Margaret Lockwood, the British picture industry has a possibility of developing a star of hitherto un-anticipated possibilities.”
Alfred Hitchcock 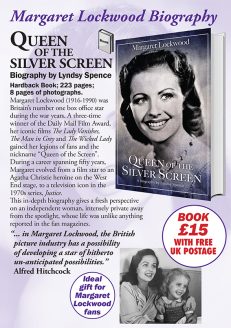 You're viewing: Margaret Lockwood Biography Queen of the Silver Screen £15.00
Add to cart