Maureen O’Hara was perhaps best known for her acting career, often starring in westerns and action films. During a two year break from acting, she focused on her singing voice and recorded two LPs, Sings Her Favourite Irish Songs and Love Letters, both of which are featured here. The first 16 tracks are devoted to folk songs from her native Ireland with versions of A Kerry Cow and Danny Boy. Tracks 17 to 28 are devoted to her personal choices from the Great American Songbook. Also featured are two bonus tracks from the original Broadway musical Christine. Now fully remastered for superior sound and in true stereo with fully detailed liner notes.

Sings Her Favourite Irish Songs: A Kerry Cow / Give Him to Me/The Rich Man Died / Wee Hughie / Johnny I Hardly Knew Ye/ There Was an Old Woman/ Danny Boy / There Was An Old Man/ He Moved Through the Fair/ Which of Them Will I Marry / Do You Remember That Night, Love/ It’s True That the Women Are Worse Than Men/ The Next Market Day / Nora Lee; I Once Loved a Boy/ I’m Going To Be Married On Sunday/ Come Back to Erin

Love Letters: My Romance/ You’d Be So Nice To Come Home To/ The Nearness of You/ Yours Sincerely/ Dearly Beloved/ The More I See You/ I Only Have Eyes For You/ Whispering/ My Shining Hour / Love Letters/ All Through the Day / My Love Is Forever 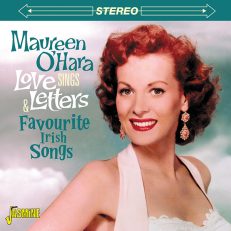