Meet the Wife with THORA HIRD and FREDDIE FRINTON

Meet the Wife with THORA HIRD and FREDDIE FRINTON on DVD

All the surviving episodes from series 1-5
including the pilot episode: ‘The Bed’.

One of the BBC’s earliest domestic sitcoms, Meet the Wife affectionately dissects mid-life marriage after the kids have flown the nest. Written by Ronald Chesney and Ronald Wolfe, it ran from 1963 to 1966. Thora and  Fred Blacklock  (Thora Hird and Freddie Frinton) are a   middle-aged couple in the north of England, just about making ends meet. Fred is an amiable plumber who likes a bet and a pint, while Thora is an incessant talker with ideas of improving the couple’s social standing. Although happy to chat in her normal northern accent, in company or on the phone she unfailingly puts on her posh voice – much to Fred’s annoyance. Despite Thora’s pickiness and bickering, there’s genuine affection between the pair. They struck a chord with the British public and confirmed Hird as the nation’s favourite comic actress.

Thora Hird (1911 – 2003) was already a very experienced actress, although her status as a national treasure would come in the decades ahead, especially during the 80s and 90s.  A Rank contract player during the 1950s, she racked up many credits during this period, but greater public recognition came in the early 1960s, when she appeared with Laurence Olivier in The Entertainer (1960) and Alan Bates in A Kind of Loving (1962).  She proved that she could hold her own and these film performances demonstrated her talent for sketching vivid, memorable characters.

Freddie Frinton (1909 – 1968) began his career entertaining his colleagues at a Grimsby fish processing plant.  However, as the legend goes, he didn’t impress the management – who sacked him.  Frinton’s first legitimate success on the stage came with Dinner For One.  Although forgotten in Britain, this eighteen-minute skit remains a New Year’s Eve staple in many European countries, thanks to a 1963 telerecording starring Frinton and May Warden.

Writers Ronald Chesney and Ronald Wolfe began their writing career on the radio, penning episodes of Life with the Lyons and Educating Archie. By the time Meet the Wife aired they’d already enjoyed great success with another BBC television series, The Rag Trade, and would continue to enjoy popular acclaim when they later moved over to ITV, with On the Buses; Romany Jones, Don’t Drink the Water and Yus My Dear. 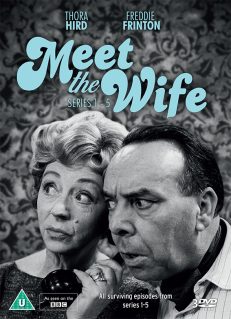 You're viewing: Meet the Wife with THORA HIRD and FREDDIE FRINTON £25.00
Add to cart