View cart “Jailbirds / Sailors Don’t Care” has been added to your cart.

Melody Club (1949)
A Tempean Films production with cinematography by Peter Newbrook. Terry-Thomas stars in one of his earliest roles as a nitwit detective on the trail of a gang of jewel thieves. He traces them to a nightclub and ultimately, more by luck than judgement, rounds them up.

A Hole Lot of Trouble (1969)
Three workmen assigned to dig a hole near a road for an electrical cable run into problems with local officials who believe the hole is being dug in the wrong place and should be closer to the home of a prissy fashion designer.

Gold is Where You Find It (1968)
Steve returns to Ireland a millionaire, gets drunk and loses the gold nuggets – everybody thinks its a gold rush. 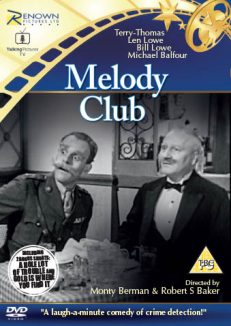