Set in the Korean war in 1950 and based on a 1949 World War II novel of the Normandy campaign â€œDay Without Endâ€ by Van Van Praag. On September 6, 1950, at the beginning of the Korean War, Lt. Benson and his platoon are stranded on a hillside, unable to contact division headquarters on their radio and unable to advance because their truck is beyond repair . Lieutenant Benson (Robert Ryan) is leading his platoon in enemy held territory after a retreat.

They are joined by Sgt Montana (Aldo Ray) who`s only concern is looking after his catatonic colonel (Robert Keith). Benson and Montana loath each other but must work together to get the men to hill 465 where they hope a division is waiting – but the harrowing march is filled with danger. 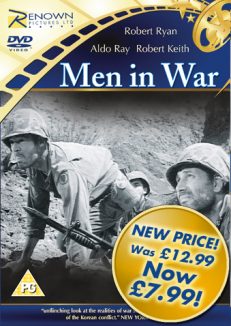