Set in 19th century Paris. Artist Toulouse Lautrec, frustrated by his physical handicaps, seeks solace in drink, dance and distractions at the infamous Moulin Rouge nightclub. An encounter with a young girl in desperate need of help brings hope to his lonely life but, in the Belle …poque, romance can quickly turn to rivalry…

Images of Paris in Silent Film (17 mins): a selection of rare early films, spanning the years 1900-1925, reflecting different aspects of life in Lautrecís adopted home, from the vaults of the BFI National Archive.

Lightning Sketches: Posters, Printing and Caricatures in Silent Film (21 mins): new technology and the artistic process find expression in this collection of archival oddities from the very earliest days of animation, mass production, and the popular press.

Commentary by Angela Allen (2019): the Huston-confidante and Moulin Rouge continuity advisor discusses this film and many others from an eclectic career in this new commentary recorded specifically for this release. 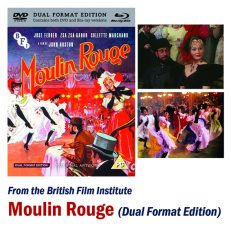