Over ten hours of 13 films and shorts in this superb 3-DVD Box Set with films previously considered ‘lost’ on DVD for the first time.

Disc 2:
TOP OF THE BILL (1971) Once ‘lost’ documentary about the great days of variety, introduced by Ben Warriss, President of the society of entertainers ‘The Water Rats’. He is joined by Charlie Chester and Wee Georgie Wood, who set the scenefor artistes from comedians to singers to acrobats, including Davy Kaye, Sally Barnes and others brought to life by gifted imitators Peter Cavanagh and Ken Goodwin.
SPRINGTIME (1946) Director: Montgomery Tully. Stars: Peter Graves, Carol Raye & Lawrence O’Madden. When Captain Winster gave a brooch to a lady in 1911 his father turned him out of the house. The subsequent history of the brooch is explained by the present day Mrs Ware, with its significance for her mother and Tony’s relatives. Carol Raye is charming in the dual lead role and excels in both the modern (1946) musical numbers as well as those of the late Edwardian period in which most of the film is set.
THE GREAT GABBO (1929) Director: James Cruze. Early musical with big production numbers. Stars: Erich von Stroheim, Betty Compson, Donald Douglas, Marjorie Kane, George Grandee, John F. Hamilton and Harry Ross.
HIGHLIGHTS OF VARIETY (1938) comedy musical short from the Bell & Howell Music Hall featuring Ernest Shannon and Sam Browne. 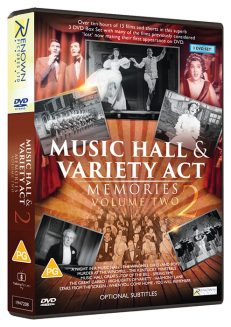